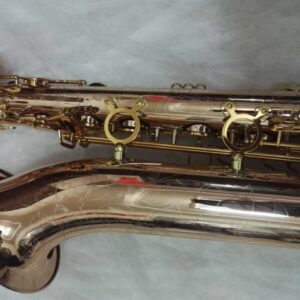 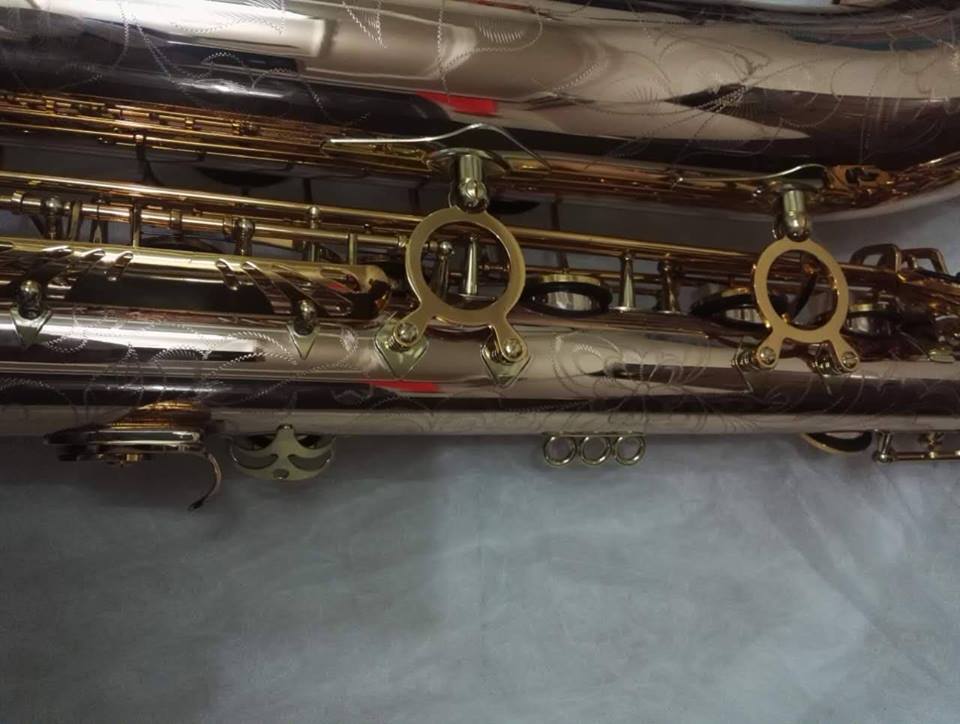 We’ve been working on this new model for YEARS!!! It reflects the latest results of our ongoing acoustic and metallurgical research, and in conjunction with several unique mechanism improvements, this is absolutely the most cutting edge design available in any baritone sax from any manufacturer, at any time, or at any price.

Why copper? Our research has clearly shown us that every metal has a different resonance characteristics. We believe that modern saxophones, and baritones in particular, have become too thin and bright sounding. There’s a very simple explanation for this: they use FAR too much zinc in their alloy, and zinc resonates at higher frequencies, at the expense of the mids and lows. The result? A thin, shrill tone, with very little bottom end. Copper, on the other hand, resonates at frequencies which are lower, most importantly, copper resonates at a frequency range which is very similar to the human voice. Of course, copper is rather soft, but we have developed a proprietary manufacturing process which alleviates this problem.

Other manufacturers of baritone saxophones, ALL OF THEM, continue to make a classic acoustic design error: they forget that the neck of a baritone sax, which is rather small, does not correspond to the neck of an alto or tenor. You must continue your calculations of the necessary taper to produce the proper nodal points onto the “pigtail”. The unique taper of our baritone at this point gives it much improved intonation, and a significantly more even timbre throughout the range. Because the proper nodes are more easily produced, the entire horn is more responsive and has a very large dynamic range. It’s simple physics, folks! You gotta do the science, and we do!

There of a couple of other acoustic improvements which are unique to our baritone. If you carefully examine the tone hole diameter and placement, you’ll see some differences from other baritones. By altering the placement of the tone holes, we were able to increase the diameter of several of them, thus giving our baritone a significantly “larger” voice. If you’ll take a look at other baritones on the market, particularly the main stacks, you’ll see the posts which support the keywork are attached to the body via large plates (called “ribs in the industry) which although strong and stable, unfortunately dampen the resonance of the body. On an instrument as large as a baritone, there is a lot of distance between the posts, so the ribs are very large. Our approach is different: instead of large ribs which extend the entire length of each stack, we use a series of small “mini ribs” which are not connected to each other, and allow much more free vibration without sacrificing strength.

All of these unique acoustic improvements are immediately apparent when you first play our baritone. It has a larger dynamic range (ppp - fff) and responds much quicker than other horns.  All of the notes, from top to bottom speak with a full, clear voice, with wonderfully accurate intonation from low A up into the altissimo range. The timbre of the horn is perfectly even from top to bottom, and does not change when you press the octave key.

We’ve made a serious effort to make sure that our baritone is very comfortable to play. The spacing of the main stack key touches (BAG/FED) is close, more like a tenor than most baritones, which allows the fingers to relax. The right hand thumb hook is our gold plated Saxgourmet ergonomic thumbrest, which supports the entire thumb. The strap hook has three rings, which allows the player to alter the angle between the horn and the body to the position which is most comfortable. The left hand thumb rest is a larger than normal metal dome, and we’ve moved the palm key touches closer together and near the thumb rest so you can stay in the playing position.

The pads used on our baritone are our famous Saxgourmet black kangaroo leather pads. These pads are extra firm, giving the horn an extremely precise “feel”.  Kangaroo leather is not only the softest leather on the planet, which gives you a very quiet action, but it’s also the strongest, giving you very long pad life. Of course, the greatest advantage of kangaroo leather is that is simply does not stick to the tone holes. These pads are made for us to our exact specifications in Wilmington, North Carolina, by our good friends at MusicMedic. Only Saxgourmet saxophones use these pads as original equipment.

The resonators we use on our baritone are solid copper “Maestro” model resonators which are significantly larger than the resonators used on other baritones (the larger ones are 48mm, the largest used on ANY other baritone is 36mm) and have raised sections radiating out from the center, which further increases the area of the resonating surface. The resonators have a “lip” around the perimeter which seals the resonator against the pad surface, preventing any blow through leakage. These resonators are installed on the pads via a 3mm copper rivet. The copper used in these resonators is the same as is used in the body tube, assuring perfectly accurate reflection of the energy wave. Only Saxgourmet saxophones use copper Maestro resonators as original equipment.

The large size of the bell and lower key cups of the baritone saxophone can be problematic. The bell of the Saxgourmet baritone saxophone is held securely in place by two separate bell to body braces instead of just one as is used on other baritones.  The large lower key cups (Eb, C, C#, B, Bb, and A) all have double arms to prevent them from flexing in a horizontal plane and also have individual key guards with adjustable bumpers.

Yet another unique feature of the Super 400 Series II baritone is the large guard which protects the previously exposed long rods on the upper stack. These rods are often bent, and this guard, which is a Saxgourmet exclusive, protects them from damage,

The neck of the saxophone is where the sound is shaped, and we have paid extra attention to both necks of the Saxgourmet baritone. The necks are dimensionally identical, but are made from two different metals. The #1 neck is made from the same copper as the body, bow, and bell. The #2 neck is made from gold brass, and will give a brighter tone should the player desire it. Both necks have threaded tenon interiors to help stabilize the lower notes.  There is a nodal weight on the neck which is attached at the point of the pressure nodes of G2 and D2 which helps stabilize these troublesome notes. Both necks have our Saxgourmet Neck Enhancer built in, which vastly improves their performance.

A feature on the Saxgourmet baritone  that all saxophonists will appreciate is our Never Stick G# mechanism. We have been using this system on our Super 400 altos and tenors (both Series I and Series II) and our Category Five model for over ten years now, and the owners of this horn invariably tell us how much they appreciate this feature. Sticking G# pads are simply not possible with this mechanism, and no other baritone in the entire history of saxophones has had anything like it.

We believe that our Saxgourmet saxophones should look as beautiful as they play, and the Super 400 Series II baritone can best be described as “stunning”! The bell, bow, body tube, and #1 neck are all polished natural copper. The keywork, key guards, and the #2 neck are all polished brass which is gold lacquered. The Super 400 Series II has more engraving than any other saxophone in history. It is fully and elaborately engraved on the bell flare, the bell, the bow, the body tube, both necks, and all key cups. You have to see it in person to fully appreciate it! The entire horn is clear coated with an electrostatically applied epoxy which will protect and preserve the beautiful finish for many years. Te Saxgourmet Super 400 Series II baritone saxophone will enter full production in the very near future. A final selling price has not been determined.